Filmavond, films for those who care | Ici et ailleurs 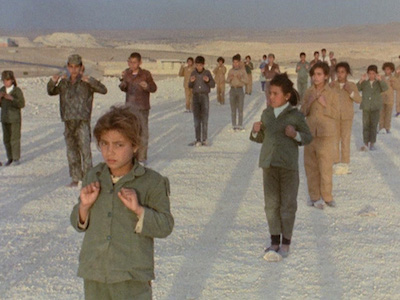 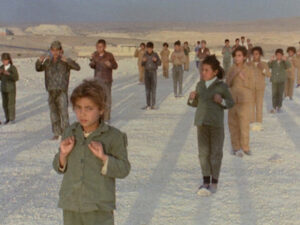 This is Jean-Luc Godard, Anne-Marie Melville and Jean-Pierre Gorin’s radical cinematic adventure that focuses on the state of life within the Palestinian camps (elsewhere) and how it is seen by people in the West (here). But, typical of Godard, the film is also self-reflexive, and is thus transformed into an acute examination of the nature of cinema itself and how it works.

Godard started off as an ‘auteur’ filmmaker, believing in the singular vision of the artist, but this idea evolved in the late 1960s, and he began to embrace the possibilities of the collective. This is a wonderful example of his collaborative work—it was a period of questioning all presumptions of cinema, and reinventing it from the ground up. New thoughts, new aesthetics and a new spirit.

This is Godard’s ‘self portrait’ which shouldn’t be confused with an autobiography. This poetic film reflects how Godard feels about several subjects, which include death and cinema…things that are closer to his soul than biographical details ever could be. Therefore Godard does not recount the story of his life, but instead he uses film to present himself the way a painter would in a self-portrait…. by making a collage of his thoughts, loves and fears.

Although he doesn’t bring out any biographical information, he does refer to his earlier films in the haunting images of JLG/JLG. As in many of Godard’s later films, the dialogue and voice-overs create a poetic montage of overlapping images and quotations from works of literature, science, and philosophy. Godard takes these quotations and montages them into visual passages based on themes of art, film, and politics. Godard is cinema’s great mixer, and with his usual technique, he weaves together bits of music, images, spoken words, audio clips and his own voice narration tying everything together (or pulling everything apart).

Much of JLG/JLG was shot at his house in the Swiss town of Rolle, on Lake Geneva, which was the place where he finally died. Other sequences were shot outside his home, set in the region’s wintry lakes and forests. This provides a beautiful setting for the film’s episodes and Godard’s autumnal reflections on art, life and cinema. Godard died with euthanasia, a willed clear-cut decision, like everything else in his life.