The Plantage Doklaan is a building located in the centre of Amsterdam that has served many functions in its life: a church, a printing business and a school. In 1998 the building was squatted by a group of 10 people and by 2000 the group had bought and renovated the building with government assistance thus securing its future as property of the collective.
The Plantage Doklaan is run by the people who live and work in the building. Everybody involved is required to share responsibility and is encouraged to take initiatives in doing so.
Presently, there are approximately 50 people active within Plantage Dok, they are artists, political activists, crafts people, designers… to name a few.
The building is equipped with a large hall (reminiscent of the original church hall, high ceiling and balcony) and a small cafe space. The hall, which we call ‘dokzaal‘, is usually rented by outside organizations for cultural activities. The cafe space is available for exhibitions and performances.
For the duration of the residency, the artist may make use of a studio space (47 m2) and a small bedroom with attached living room (12 m2), all with broadband wifi. The kitchen and sanitary facilities are communal.
The studio and apartment cost 550 EUR /month.
A residency period is typically 2 months minimum and 5 months maximum. The residency is designed for only one artist and priority goes to artists living and working outside of the Netherlands.
For further information find our page on TransArtists or contact us.
Due to the limitations related to COVID-19 pandemic we are currently not accepting applications. 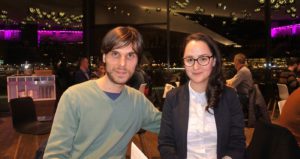 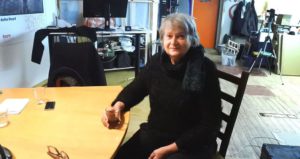 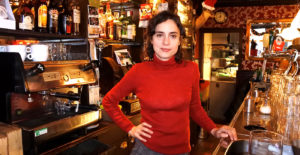 Click on the foto’s above to read 3 interviews about the residency. 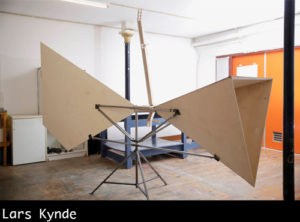 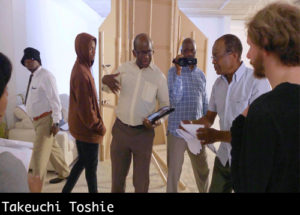 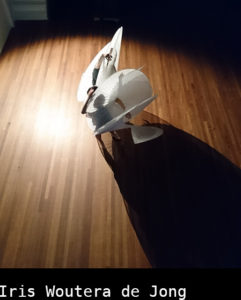 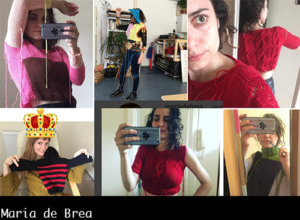 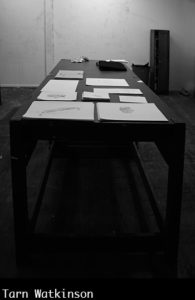 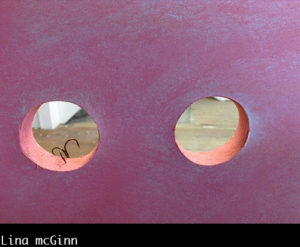 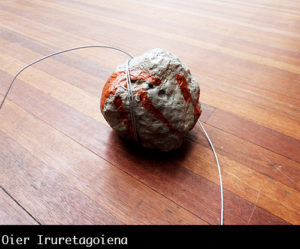 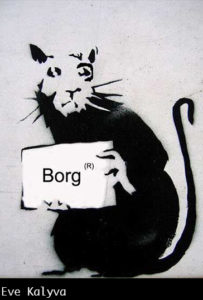 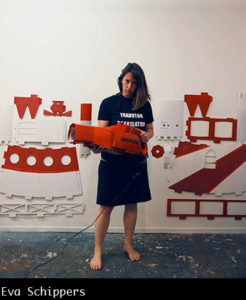 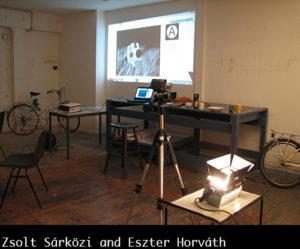 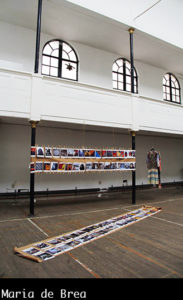 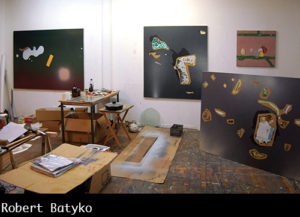 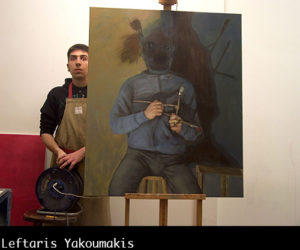 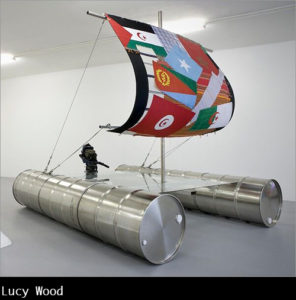 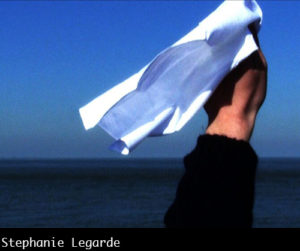 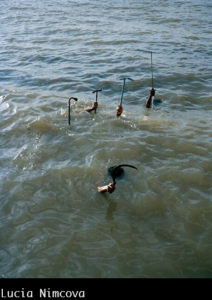 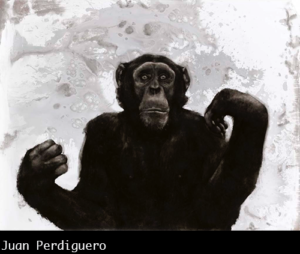 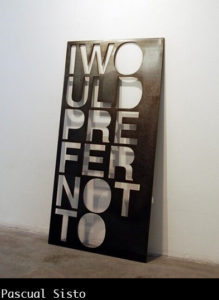 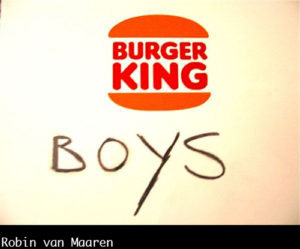 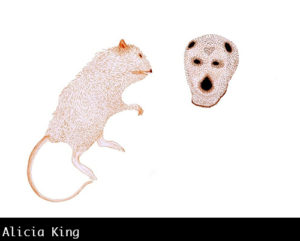 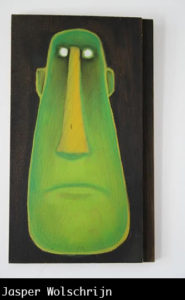 2016 | Nadine Jeffries, Canada | About her experiences at the Guest Studio The residency was a lovely experience and a great introduction to Amsterdam. I am still in touch with the director, Lino Hellings, who I consider a friend, and an inspiration! During my residency I was painting on canvas exploring new colour application techniques, and researching printable organic fabrics. I am now beginning the process of designing fabric based on the images in my works of art. These original textiles will be used in the production of a unique streetwear collection, under my independent fashion label, DFLYMtl.

2015 | Eve Kalyva, Greece | About her experiences at the Guest Studio My stay at the Guest Studio was absolutely amazing. Within the first week I met everyone there – well, almost everyone because it is a big place! I was really thrilled to be surrounded by so many creative people and from different disciplines including theatre, music, fashion and visual arts but also crafts and woodwork. As an artist, I find that very important: It is not just the place that matters but also (or in some cases, even more so) the people, their energy and input. And at the Guest Studio one finds all sorts of inspiration. The other attractive quality of this place is its social outlook: It’s social awareness and sensitivity towards bigger issues such as the environment and global injustice, and an applied interest in communal living and sharing. So don’t miss out the ‘work weekend’ when people get together and take care what needs taking care of, from fixing the garden to putting new slabs on the roof to installing electrical wires. I have certainly added the latter to my skill set. In more practical terms, both the location and the place is great. There is a very comfortable living space with a lovely view and a good sized studio to explore. The studio can also function as an exhibition space, which is what I did at the end of my residency period. If one wants to go bigger, there is also a cafe in the building and a very big hall with high ceiling, the Dokzaal. I have done other residencies and I really appreciate the flexibility and support that is offered. It is a very versatile and inspirational space and it gives you a good introduction to the local cultural and social life.

2013 | Robert Batyko, Hungary | About his experiences at the Guest Studio I liked the location of the building (beautiful area, calm but close to the city centre). More important than that I really liked the community of the dokkers just like the room and the studio. There was a lots of activities around, rehearsals and shows at the Dokzaal, exhibitions and concerts at the cafe. I enjoyed being a bartender for the first time in my life. It was a pleasure being a stranger at the Plantagedok. I don’t think that I disliked anything. Honestly the only bad thing was that I had to leave the place after 5 months. What can I say? Open the cafe every day :). I created a series of oil paintings and in the end of my residency I made a show at the wonderful Dokzaal. I also made collage works, photography. I was very satisfied with the conditions of the guest studio! Afterwards I created a catalogue of what I’ve done during my stay and I presenter the works I made at my hometown in Budapest. Thank you Plantagedok!

2011 | Leftaris Yakoemakis, Greece | About his experiences at the Guest Studio The time I spent in Amsterdam and the amazing hospitality I experienced has never left my thoughts and heart. So, I’m getting straight to the point.I was the guest artist at the Doklaan for March and April 2011. I’ma painter and my project there could pretty much be described as studying Rembrandt. I spent a lot of hours at Het Rembrandthuis museum discussing with Mr Eric Armitage who was demonstrating Rembrandt’s painting techniques and almost every other day I visited Rijksmuseum to study Rembrandt’s paintings up close. The result of this study was, initially, two paintings I did in the Doklaan in which I tried to employ all I had learned and was learning “near” Rembrandt, in terms of use of materials, painting technique, perception. It was a great privilege to be able to run from my easel to the museum and back anytime I wanted. By the time I left Amsterdam I had collected enough material as well as personal conclusions to make a lecture on Rembrandt’s work, which I did a year later, at the municipal workshop I was working in as an Art teacher. All in all, my short “pilgrimage” in Amsterdam and working at the Doklaan granted me skills and knowledge and helped develop and explore new methods in my craft. But there’s more to this experience. At the Doklaan I got acquainted to Amsterdam’s squatting scene. I heard stories, was taken to places and participated in the hustle and bustle of running the house. I saw the most amazing things going on in an underground scene that I’d never imagined existed. What I found most inspiring is how so many creative people got together to realize their visions, with any means provided. This was a life changing experience for me as an artist and as a person, for it lead me to redefine what it means, and what it takes, to be creative. This experience played a great part in me getting initiated to pursue various dreams after leaving Amsterdam, including an unsuccessful squatting attempt in Athens, migrating to Iceland for seven months and making a small art-book with my drawings amongst other things I’ve done in the past three years.To conclude I’d say staying at the Doklaan benefited me both as an artist and as a person. I can’t say there’s something I didn’t like but I have to say this. I think staying at the Doklaan is not for everyone in a sense that to make the most of one’s stay he or she should be familiar, or at least open. to collective action and initiatives. If you’re seeking an arty-farty, “sterilized” environment to make art this might not be the place for you.

There are very limited parking possibilities in the area, so please come by bike.